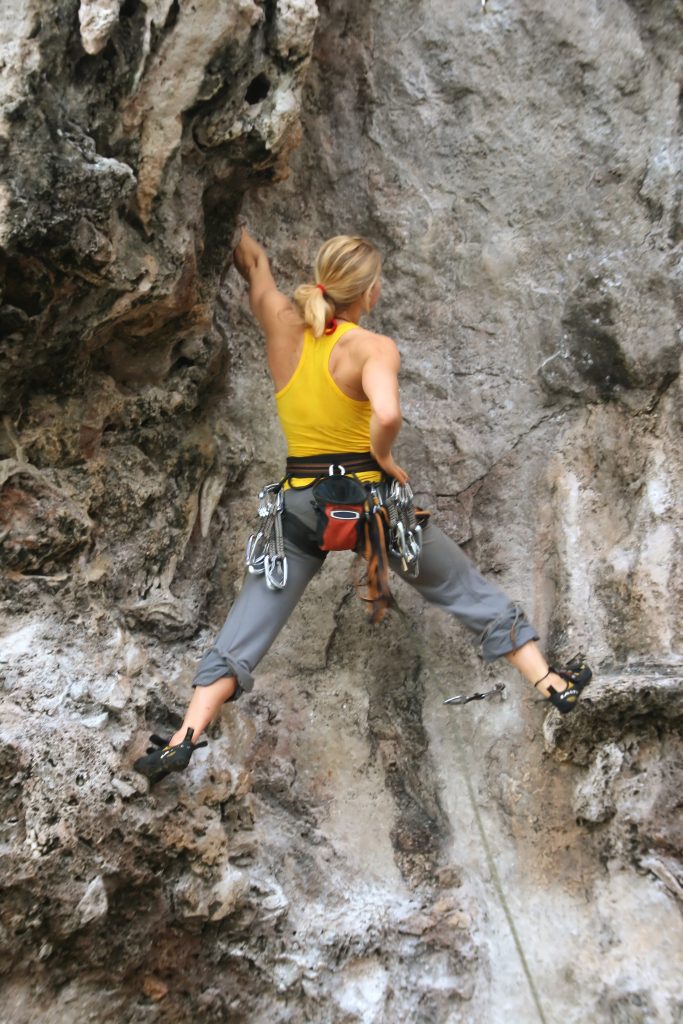 Lest anyone think college is all about classrooms and books, many universities today offer a panoply of extra curricular amenities for students to enjoy. One of the main attractions is student recreation centers. At Louisiana State University (LSU), the University Student Recreation Center (UREC) is a place where students can go with friends and guests to exercise and participate in recreational activities such as indoor rock wall climbing.

On the evening of December 3, 2008, LSU Senior Brandy Fecke and a fellow classmate visited the indoor rock climbing facility at the UREC to complete a required assignment for an Outdoor Living Skills Activity course. Ms. Fecke signed a Rock Climbing Wall Participation Agreement and stated that she had previous rock wall climbing experience. Ms. Fecke indicated that she wanted to climb the easiest wall, which was a wall that did not require her to wear a harness or ropes. Ms. Fecke’s classmate was required to stand behind her and act as a spotter in case Ms. Fecke needed assistance.

After Ms. Fecke and her classmate received instructions and a climbing demonstration, Ms. Fecke began climbing up the wall. Upon reaching the top of the wall, Ms. Fecke fell thirteen feet to the ground where she sustained multiple fractures to her left ankle. Ms. Fecke’s injury was so severe that she underwent three major surgeries and required additional surgeries at the time of the lawsuit, including either a permanent ankle fusion or an ankle replacement. Ms. Fecke and her parents, Stephen and Karen Fecke, sued the LSU Board of Supervisors (Board) for damages Ms. Fecke sustained as a result of the accident. A jury returned a verdict in favor of Ms. Fecke and her parents and the Trial Court adjusted the award amount to $1.4 million. The Board appealed the Trial Court’s judgment and award to the Fecke family.

The Board’s appeal centers on two issues. First, the Board argued that the Trial Court should not have excluded from evidence the one-page Rock Climbing Wall Participation Agreement (Agreement) that was provided to Ms. Fecke by the LSU employees. Prior to trial, Ms. Fecke filed a motion to exclude the Agreement, stating that the document constituted a waiver of liability releasing LSU from all liability for causing injury to Ms. Fecke. In Louisiana, such exclusion of liability waivers is null. See La. C.C. art. 2004. The Trial Court granted the motion to exclude the Agreement. However, the Board argued that portions of the waiver established Ms. Fecke’s mental and physical health and that she knew the risk of injury associated with rock wall climbing.

Instead of providing the jury with the Agreement, the Trial Court provided the jury with information that Ms. Fecke was in good health and had no mental or physical conditions that would hinder her ability to climb the wall. Expert testimony was provided stating that Ms. Fecke was not properly instructed before climbing the rock wall. Ms. Fecke’s and her classmate’s testimonies revealed that they did not truly understand the proper techniques for climbing the rock wall or spotting one another. Further, the testimonies of the LSU employees revealed that there was an “Indoor Climbing Wall Manual” for this activity, yet one employee stated that he did not even know the manual existed while the other employee stated he did not use the manual. The Court of Appeal determined that the LSU UREC employees failed to properly instruct, demonstrate, and check that Ms. Fecke and her classmate understood how to climb the wall in accordance with their duties outlined in the manual.

Ms. Fecke’s case is a great example of good attorneys going head to head. On one side, Ms. Fecke’s attorney kept the Rock Climbing Wall Participation Agreement out of the hands of the jury. To be sure, that agreement would have negatively colored the jury’s perception of the case from Ms. Fecke’s perspective. On the other side, LSU’s lawyers were able to characterize Ms. Fecke’s injury as a loss of future earning capacity thereby reducing the damages by roughly half of the original award. When the stakes are high, it always pays to retain experienced lawyers who will advocate on your behalf and get you the best possible outcome.

Additional Sources: BRANDY LYNN FECKE, STEPHEN C. FECKE, AND KAREN FECKE VERSUS THE BOARD OF SUPERVISORS OF LOUISIANA STATE UNIVERSITY AND AGRICULTURAL AND MECHANICAL COLLEGE