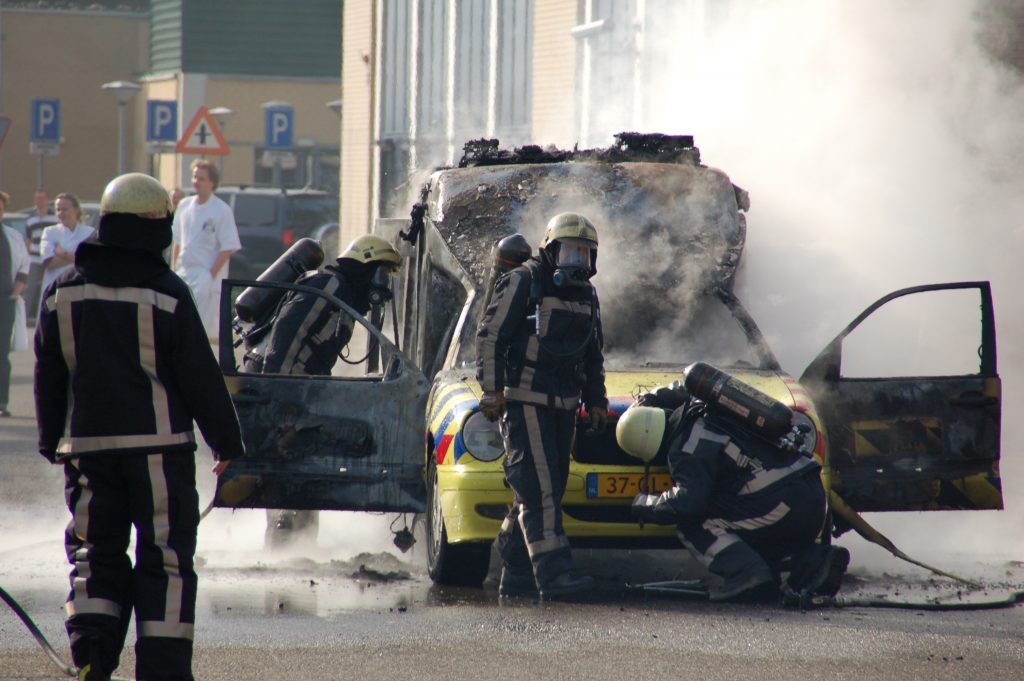 We’ve all been in the situation where we’re sitting at a red light or approaching an intersection and all of a sudden we hear sirens and see flashing lights. Everyone knows to stop and yield to the oncoming ambulance. Sometimes, however, a driver might not yield for whatever reason. This is exactly what happened in this case, which involves an EMT who was injured on the job while riding in an ambulance.

Two volunteer firefighters with the Washington Parish Fire Department (WPFD) responded to a call in Varnado, Louisiana. When they arrived at the scene, they found a man lying on the ground and proceeded to provide CPR until an ambulance arrived. Once the ambulance arrived, the two firefighters loaded the man into the back of the ambulance and continued to tend to him, as is customary. The Defendant in the case agreed to drive the truck.

While en route to the hospital, the ambulance was struck in the right rear by a blue Honda at the intersection of Highway 21 and La. Highway 10. The ambulance slid and collided into another vehicle. The Plaintiff, who had been sitting in the back of the ambulance without a seatbelt, sustained injuries from being thrown around due to the force of the crash.

The Plaintiff sued to recover damages, naming several Defendants. At the time of trial, the only remaining Defendants were the ambulance driver, the WPFD, and their insurer, American Alternative Insurance Corp. (AAIC). The jury found in favor of the Defendants, answering affirmatively the following three questions:

1. Do you find that the ambulance driven by the Defendant was responding to an emergency call?

2. Do you find that the audible and visual signals on the ambulance were sufficient to warn motorists of its approach?

3. Do you find that the Defendant slowed or stopped the ambulance at the intersection of highway 10 and 21 as may be necessary for the operation of the ambulance and the safety of its persons?

The jury was responded “no” to a fourth interrogatory: do you find that the Defendant acted with reckless disregard for the safety of others?

The Trial Court found for the Defendants and ordered each party to pay its own costs. The Plaintiff filed a motion for judgment notwithstanding the verdict or in the alternative, a new trial, which the Trial Court denied. The Plaintiff then appealed that judgment to the Louisiana First Circuit Court of Appeal.

The Court of Appeal began by noting that it may not set aside a jury’s finding of fact even if it has a differing opinion than that of the jury’s as long as the jury’s evaluation of and inferences from the facts was reasonable. Rosell v. ESCO, 549 So.2d 840, 844 (La. 1989). Thus, the issue to be resolved by a reviewing court is not whether the trier of fact was right or wrong, but whether the fact finder’s conclusion was a reasonable one.

Upon review of the applicable law and factual record, the Court of Appeal found that all of the jury’s conclusions were reasonable. It began by looking at La. R.S. 32:24, which states that drivers of emergency vehicles can exceed speed limits and drive through stoplights and stop signs if need be as long as the driver uses the proper audible and visual signals to alert other drivers. However, this does not give drivers free reign to be careless.

The Court of Appeal discussed several cases that noted the importance of giving some leeway to emergency drivers so that they can properly perform their duties. It determined that if an emergency driver is responding to a call, the applicable standard of care is to not engage in a “reckless disregard for the safety of others.”

The Court of Appeal noted that there were discrepancies in the testimony on record. A police officer stated that the Defendant did not stop at the intersection, while the Defendant asserted that he did. The jury, as fact-finder, believed the Defendant. The jury also determined that the ambulance was operated with its emergency lights and sirens engaged at all material times.

Drivers of vehicles in or near the intersection testified that they both saw and heard the ambulance and had stopped to yield the right of way. There is also evidence, albeit disputed, that the driver of the Honda was faced with a red light immediately prior to the collision. The record leaves unanswered why the Honda proceeded through the intersection, or whether its driver either heard or saw the ambulance prior to the impact. However, there was a sufficient and reasonable factual basis to support the jury’s finding that the ambulance’s use of its visual and audible signals was sufficient to warn motorists of its approach. The Court of Appeal further noted that the Plaintiff failed to suggest a more effective alternative method of which the ambulance could have warned other motorists of its approach. In other words, since the driver followed all proper protocols while operating the ambulance, he was not engaged in a “reckless disregard for the safety of others.”

This case illustrates the important role that the jury plays in the fact-finding process. It is the foundation of our judicial system in America. As such, it is not easy for a reviewing court to overturn a jury’s findings. This makes sense because the jury has the benefit of being present in court and watching and listening to testimony first-hand. An appeals court can only read on paper what happened and naturally defers to the Trial Court’s on fact-finding issues.