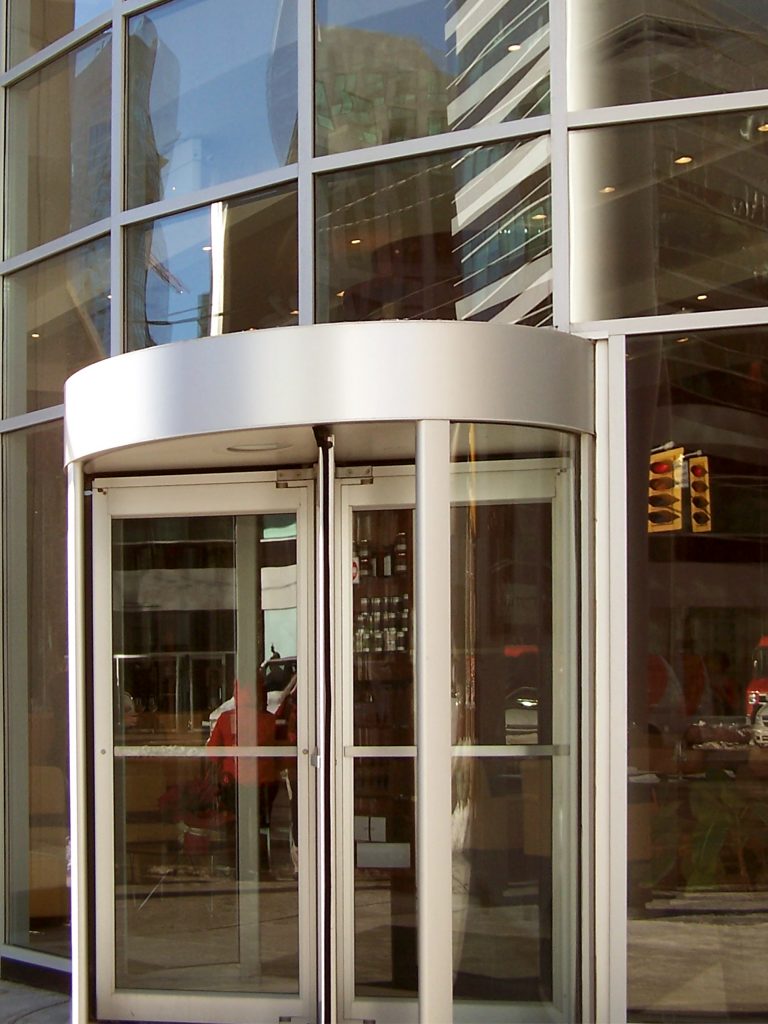 We have all had that moment in a revolving door when the door seems to be moving just a bit too fast. You do your best to keep up but the back of the door knocks into your foot.  No harm, no foul when you get a little bump on your foot. But what if an entire glass pane fell off the door and pinned you into the other side of the door. I would expect you would be pretty upset and you would want to figure out who is responsible for your injuries.  Is it the hotel, the door manufacturer, the installer of the door? The following case out of New Orleans sheds some light on who might be responsible when a revolving door almost turned into a death trap for one unfortunate man.

In 2004 while working as a courier Huey Madison had deliveries to make at the Inter-Continental hotel in New Orleans, Louisiana. Huey alleged while exiting the revolving door of the Hotel the door panels collapsed and pinned him between the glass causing him injuries. Huey filed a lawsuit claiming damages resulting from the hotel’s failure to properly install, monitor, and repair the revolving door. Intercontinental answered Huey’s lawsuit, denying all claims while also asserting a third-party demand against Carolina Door, claiming Carolina Door had total control over the inspection and repairing of the door in question. Huey subsequently filed an amended petition with Carolina Door listed as a direct defendant.

Both the Intercontinental Hotel and Carolina Doors sought to escape liability by filing motions stating each were solely responsible for Huey’s injuries. These motions are called summary judgments and are standardly filed in cases such as this.  If the party who files a summary judgment motion can demonstrate that there are no facts in dispute and according to the law they are not responsible they can evade responsibility. In response to those motions, Huey filed a memo in opposition and attached the affidavit of an expert witness in the field of construction. Huey argued the expert affidavit provided facts in dispute that would defeat defendants’ motion for summary judgment. Carolina Door subsequently filed a motion to strike Huey’s expert affidavit, arguing the introduction of an expert witness was too late and violated court orders. At the hearing on the motions for summary judgment and motion to strike, the trial court held Huey failed to produce factual support concerning negligence by Carolina Door, and thus granted Carolina Door’s motion for summary judgment. The trial court also denied Carolina Door’s motion to strike without much explanation.

Huey decided to appeal those rulings to the Fourth Circuit Court of Appeal in Louisiana. On appeal, the appellate court first began their review of the rulings by addressing Carolinas Door summary judgment win. In reviewing the evidence presented, the appellate court noted a representative for Carolina Door testified that Carolina Door was responsible for responding to any service calls regarding issues with the door. Carolina Door did in fact respond to service calls from Intercontinental after the door had been installed prior to the alleged injury. It was also established the door was under warranty, and hotel employees were instructed to contact Carolina Door if there was any problem occurring with the door. An engineer for the hotel testified that Carolina Door had been contacted multiple times prior to the accident regarding the revolving door collapsing too easily. The door collapsing is what caused the alleged injury. Carolina Door provided blueprints establishing how the door was manufactured to collapse through a specific mechanism for  the purpose of taking down the door. Based on the evidence presented, the appellate court held there was issues of material fact present regarding Carolina Door’s duties regarding servicing and repairing the door. Thus, the appellate court overturned and reversed the trial court’s ruling granting Carolina Door summary judgment, declaring there were remaining questions needed to be answered regarding design and safety specifications and whether Carolina Door had a responsibility to warn of the door’s potential to collapse.

The appellate court then reviewed the ruling on Carolina Door’s motion to strike. A trial court is afforded vast discretion with regard to evidentiary rulings, and the court’s decision to admit or deny evidence will not be disturbed on appeal absent a clear abuse of discretion. See   v. Diamlerchrysler Corp., 50 So.3d 173, 190 (La. App. 4 Cir. 9/24/10). The trial court had set a discovery cutoff date of July 20, 2012, and Carolina Door argued Huey introduced an expert affidavit at the last second, even though Huey did not mention this expert in its witness list filed on March 7, 2012. The appellate court pointed out that no trial date had been set when Huey introduced the expert affidavit in December 2013. The existent of a trial date has been noted as a key factor in the trial court’s discretion to admit or deny witnesses or evidence into the record. See Provost v. ARC Const., L.L.C., 119 So.3d 23, 39 (La. App. 4 Cir. 3/20/13).

With those two rulings the Louisiana Fourth Circuit Court of Appeal allowed Huey’s claims to continue against Carolina door. This case demonstrates that the best lawyers know that a win in the trial court does not guarantee that an appeals court will not overturn that ruling. It is unknown whether ultimately Huey was able to recoup any payment from Carolina Door, but at least with this ruling his claims survived to continue the battle.